Speaking from our experience of visiting Disney World Florida ourselves, we understand how expensive eating at some of Disney’s restaurants can be, however, we also appreciate that sometimes it is nice to eat inside the resort and enjoy the whole Disney experience.

If you’re on a tight budget but are still hoping for the holiday of a life time at Disney World Florida, we want you to know that it is possible to do everything you want, including eating out, on the tightest of budgets.

To help you keep to your vacation budget and still be able to enjoy the pleasures of some of Disney World’s best places to eat, we’ve put together our top 5 cheap restaurants in Disney World that are ideal for families of any size.

What are the top 5 cheap restaurants in Disney World?

Below are a selection of the cheaper restaurants inside Disney World Resort that are perfect for those days where cooking at the villa doesn’t seem like an option but you still want to stick to your budget.

The first on our list of cheap restaurants in Disney World is Blaze Pizza. With brilliant reviews on TripAdvisor and plenty of vegetarian and vegan options, this great pizzeria is located at Disney Springs. Their pizzas start at just over $5 and salads and desserts are also available.

Sweet Tomatoes is a buffet restaurant that caters to people with a variety of tastes. From salads and baked potatoes to macaroni cheese and soups, there’s definitely something for everyone. Also renowned for their fantastic desserts, this restaurant is good value for money.

Again located in Disney Springs, this restaurant is a tasty and traditional sandwich place that offers all the classics. Although it’s slightly pricier than some of the other restaurants we’ve mentioned, the portions aren’t for the faint hearted and side dishes can be ordered to go with any sandwich.

If you’re a fan of South American cuisine for an affordable price, you’ll love Sofrito Latin Café. With a variety of menu options and low prices, this is an ideal place for anyone with a small budget.

Traditional American cuisine is something that everybody needs to experience when visiting Florida and Flame Tree Barbeque is just the place to do it. Situated in Disney’s Animal Kingdom, this restaurant is the ideal place to eat after visiting this section of the park.

Book your Florida villa in time for your Disney vacation!

If you are jetting off to Walt Disney World Florida and are still searching for your ideal accommodation, look no further than We Want That Villa.

We have hundreds of stunning villas situated under an hour’s drive away from Disney World that are suited to small and large groups of any age. All of our villas come with their own private pool and some come with a games room that would entertain the kids for hours.

To browse our wonderful range of villas and find the one that’s perfect for you, visit our website.

As much as we know it’s possible to fill your days exploring the magical wonders of Disney World Resort, it’s important to remember that there are hundreds of other fun things to do in Orlando Florida that both you and the kids will love.

From sea creatures and sightseeing to science exhibits and magic shows, Orlando has something to offer everybody. After visiting Orlando Florida with our family every year for over 20 years, we’ve enjoyed spending time exploring the many other family friendly wonders that it has to offer.

What are the top 3 fun things to do in Orlando Florida?

The world renowned Coca Cola Eye is a 400ft tall observation wheel that quickly became one of the most popular attractions in Orlando and gives you the opportunity to see Florida from up high. This fantastic experience costs just $25 per adult and offers a fantastic experience. Furthermore, combination tickets can be purchased that give you access to the Eye and one other famous attractions such as Sea Life. These tickets start at $39 but can save you an average of $33.50 off individual prices.

Sea Life Orlando is one of the most popular aquariums in the world and with over 5000 different species of sea creature and a 360 degree glass ocean tunnel, this is a place that will entertain the kids for hours. Several talks and feeds take place throughout the day which makes Sea Life a fun and educational day out. Tickets start at $20 but you can receive a 10% discount if you book online.

With 4D XD simulator rides, Laser Tag, indoor rope challenges and science experiments, the WonderWorks is a brilliant day out for children of any age and has activities that even the adults can get involved in. There are over 100 exhibits and there’s even a magic comedy dinner show in the evenings where the whole family can enjoy unlimited pizza.

Still searching for your 2018 Florida accommodation?

Now that you’ve opened your mind to a few of the most fun things to do in Orlando Florida, it’s time to start planning your next vacation. If you have been searching for the perfect accommodation for your 2018 Florida vacation, We Want That Villa can help.

We have hundreds of luxurious villas in Florida that are all under an hour’s drive away from the most popular resorts and attractions. Each villa has its own private pool and with some of them having a maximum of 8 bedrooms, you certainly won’t be short on space.

If you’re interested in looking at some of the villas available for hire during your vacation, just head to our website and browse the selection. 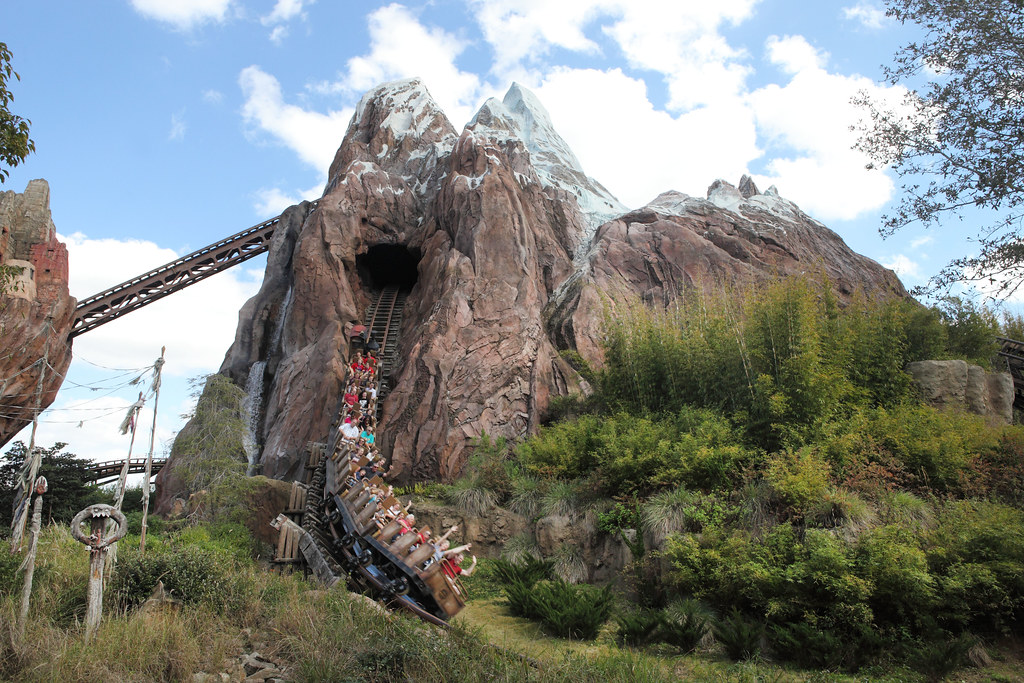 It’s not hard to understand why Disney World Orlando is one of the most popular tourist destinations in the world when you consider how much it has to offer. From spending time shopping and eating in restaurants, to visiting the safari animals and enjoying an ice cream, you’re never short of something to do.

Besides wanting to meet some of Disney’s most famous characters, one of the main attractions at Disney World Orlando is their variety of thrilling rides. With something for the entire family, the theme park rides make a fun day out for everyone.

Having tried and tested some of their biggest and most famous rides, we’ve put together a selection of the top Disney World rides to help you plan your trip to Disney World.

As the second fastest ride in Disney World, reaching speeds of 57mph, Rock ‘n’ Roller Coaster is located in the Hollywood Studios area of the park. Not only does it go upside down, it’s also the only rollercoaster in Disney World to have an inverted drop. Better still, as you’re souring around the track at high speeds, Aerosmith tracks are played in the background. This ride is perfect for those that love thrills and old school rock and roll.

Expedition Everest is one of the most popular rides at the Disney World Orlando Resort and is experienced by millions of people each year. It’s a traditional rollercoaster that’s been taken to the next level with a series of special effects and stunning scenery and although it’s not filled with surprising drops and loop-the-loops, it does go backwards once you’ve reached to top of the track.

At 61 meters high with a 40 meter drop, the Tower of Terror is third on our list of top Disney World rides and is set inside the Hollywood Tower Hotel. Simulating a haunted hotel, visitors follow bellhops into a lift, where they are strapped into their seats and the ride begins. Guests are then dropped for 40 meters at 39 mph before reaching the hotel basement and stepping off the ride.

Space Mountain is an indoor roller coaster that follows the theme of being inside a spaceship and exploring the universe. The roller coaster is in complete darkness with the occasional flashes of strobe lighting and consists of a series of steep drops and sharp turns. It’s the oldest roller coaster in the Disney World Resort but has since been modernised.

The final ride on our list of the top Disney World rides is Splash Mountain. Covering half a mile and boasting several mini drops, the Splash Mountain log flume is another of the most popular rides at the resort. After making its way around the track, exploring caves and swamps and interacting with characters, the ride finishes with a 5 story drop.

Are you seeking your next thrill on some of the best Disney World rides?

If you’re in the process of planning your next Disney World Orlando vacation and are searching for your dream accommodation, look no further than We Want That Villa.

We have a variety of privately owned luxury villas, perfect for groups of any size, that are situated within an hour’s drive of some of Orlando’s most famous attractions.

Whether you’re traveling alone or in a large group, browse our website to find your villa for 2018 today.

When searching for your ideal Florida holiday accommodation it is important to consider all options, especially for those who are on a budget. As the cost of food, park tickets and travel can add up, making savings on your accommodation where possible is ideal.

Renting a cheap villa in Orlando is often the most cost-effective way for families to vacation, providing space for the whole group you are travelling with, without breaking the bank. However, we often find that our vacationers are surprised when they find out how cheap Orlando villas really can be.

How are cheap villas in Orlando better than hotels?

There are a variety of reasons why renting a cheap villa is much more cost-effective than staying in a hotel. Below are just a few:

If travelling in larger groups, it’s much more cost effective to rent a spacious villa and split the cost between each guest than paying for multiple hotel rooms. The cost of renting a villa is much cheaper per person and can save each guest a few hundred dollars on their vacation accommodation. Furthermore, hiring one of our many cheap villas in Orlando will give large groups the chance to socialise with each other without being in the company of other hotel guests.

When staying in a hotel, if you are intending on having breakfast and an evening meal at one of the hotel restaurants every day, a large portion of your budget will go on food and drink. Additionally, as mentioned above, you will also be charged a service charge by the servers waiting on your table. This cost can be avoided by staying in one of many cheap villas in Orlando and cooking your own meals. Not only will you save money buying food from the supermarket and cooking it yourself, it’s also a perfect opportunity to get the kids involved in cooking.

Although most hotels offer forms of entertainment such as arcades, pools and sporting activities, they often incur an extra fee. However, private villas come with their own forms of entertainment. All our villas have their own private pool and some even have hot tubs, games rooms and home cinemas- all of which are included in the rental cost. This means that the kids can keep themselves entertained without you having to spend extra money on activities.

Why choose one of our cheap villas in Orlando?

Here at We Want That Villa, we only rent out villas that are privately owned instead of agency owned. This is because when a villa is rented out by an agency, service fees are added on to the cost of the villa hire which can increase your vacation accommodation bill by hundreds of dollars.

If you’re already searching for cheap villas in Orlando ready for your 2018 vacation, feel free to browse through the villas on our website- you might find the rental villa you’ve been searching for.

Copyright, We Want That Villa Limited 2022, all rights reserved